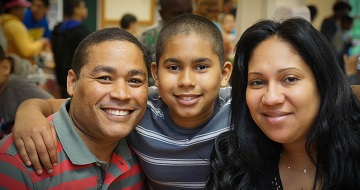 FROM THE DESK OF AMY LI, ABBE REGISTRAR

As a first-generation American born to Chinese immigrants, I sometimes feel a special connection to the members and their families at Abbe Clubhouse.

When I was growing up, my parents often worked seven days a week, leaving me in the care of my amazing grandmother. My grandmother was in her 50s when she immigrated with my parents, and although she was already multilingual (fluent Cantonese, Mandarin, Teochew, and some Vietnamese) she had difficulty grasping another new language, English.

The afterschool I attended had no Chinese-speaking staff, and I remember that my grandmother would cope by making up her own English words and repeating my name multiple times when she had to pick me up. Sometimes she could find a parent who spoke Chinese and English and was also picking up their child to help translate for her. Soon enough, the afterschool’s staff was able to recognize and trust her even as she continued to struggle with English.

Thinking of my grandmother, I empathize with parents or guardians struggling to take advantage of important opportunities simply due to a language barrier. Language barriers make it difficult to understand how to sign up for services and comply with various rules and regulations.

I’m so grateful that BCNY makes every effort to communicate with all of our members’ families, despite language barriers. As the Registrar for the Abbe Clubhouse, I get to see first-hand the diversity of parents involved in our programs. In fact, a great deal of our Abbe explorers are dropped off and picked up by grandparents with limited English abilities, if any at all.

Our pick-up policy is deliberately designed to help boys get the most out of our programs: we ask parents to wait until programs are concluded before picking up their sons. Many international grandparents and parents don’t understand that initially–they remind me of my grandmother and her difficulty communicating in English. We have a number of Spanish-speaking staff who help out with drop-off and pick-up, and I always assist with Mandarin-speaking parents and grandparents in getting acquainted with this procedure. By the end of the school year, though, I know each parent and grandparent, and it feels like language is no longer a barrier, but a way to get to know our members and their families even better.