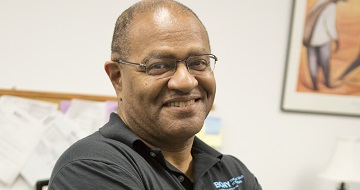 In 1991, after working for the Boys’ Club for 13 years on Manhattan’s Lower East Side, I arrived in Marion McMahon Abbe Clubhouse in Flushing, Queens, as the new Clubhouse Director.

Flushing was indeed very strange territory for me; I grew up an urban kid navigating the mean streets of Harlem, the South Bronx and Bedford Stuyvesant. Even my work on the Lower East Side was at a time when the streets were rampant with crime, drugs and all the other outward signs of a city struggling to find its way.

Working at Abbe brought me to 41st Road, a tree lined block of one-family homes that had backyards and garages, and bicycles left lying in the front yard. As you can imagine, no one I knew left their bikes lying on their front lawns, even they had a front lawn at all! The neighborhood a very big change for me, to say the least.

I shouldn’t have worried. I had forgotten what drew me to the Boys’ Club, and what has kept me there for so many years. It have never been about whether members are urban or suburban, rich or poor, from Queens or Manhattan. It’s about personalities. Yes those wonderful, unpredictable, enriching personalities that you see growing before your eyes. Boys’ Club boys are amazing kids across the board, and being in Flushing didn’t change a thing.