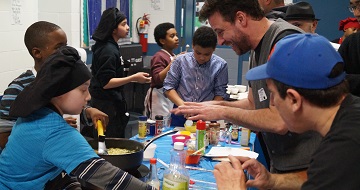 QNS.com, Sunday, March 20, 2016 Junior chefs in Flushing were able to flex their culinary skills during a healthy eats competition on Wednesday evening.

The students, who are part of an after-school culinary club known as The Boys’ Club of New York (BCNY), trained once a week for six months for the Junior Battle Chef event. The Abbe Clubhouse team of Queens won the battle for the second time this year. Read the story.